What Does It Take to Reach 28% Cycling?

The Handshake Roll is a series of blog posts by our Handshake participants and connected parties, published here on the news pages of Handshake. 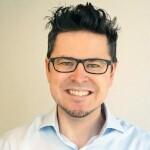 Here we profile some characteristics of a long-established cycling city, Freiburg in south west Germany.

The person with the pen is Reggie Tricker, who works for Handshake partner ICLEI Europe, which is based in the city.

What makes a cycling city where 28% of trips are undertaken by bike?

Covering around 20km around the city, Claire Daly from Sustrans Scotland met up with Reggie Tricker from ICLEI Europe in Freiburg on a sunny December day to find out.

From the old inner city to the new development areas of Vauban and Rieselfeld, we ventured out to discover what makes Freiburg such a healthy and liveable place. What connects these neighbourhoods? How do they differ? What can we learn about creating a joined up network?

We began our journey at various parts of the city centre that have been transformed in recent years.

Europaplatz, at the northern perimeter of the city centre, has been transformed from the previous gyratory system that ate up public space. A new tram interchange, linking with Freiburg's recently-introduced city bike share system and forthcoming electric bus fleet, now provides space for city life and commerce.

Europaplatz still accommodates four lanes of motor traffic, circulating around the otherwise distinctly car-free central shopping area (the Altstadt). The design of space and and use of materials means all but the most confused tourists in the height of summer stay away. Only a very small amount of signage is needed to deter access, with no other physical infrastructure used.

Interestingly, cycling is permitted only after 8pm. People appear content with pushing bikes, or finding alternative routes to avoid the busy central crossroads which has four tram routes converging with people on foot (webcam).

The next stop was the Dreisam river, which provides the route for the city's main FR1 cycle route, running roughly east-west. This riverside path has been upgraded over time and now carries around 7,000 cyclists per day. Valleys have confined the city's housing growth and defined the directions of its main transport routes, and paths like this mean that most parts of the city can easily be reached in 15-20 minutes by bike.

A complex new junction over the river links the city centre with the FR1 and neighbourhoods to the south of the river.

FR1 route along the Dreisam river

In the future, there are proposals to further bury the adjacent B31 road which runs alongside the river and carries heavy regional traffic across this part of south west Germany. Detouring back to the city centre along the Rotteckring, we experienced some of the city's bicycle streets (or "Fahrradstraßen"). What was until recently a relatively standard street for motor traffic now features a green tram corridor and well-designed public spaces.

Images show before and during this transformation. The new public spaces provide flexible areas for events such as student fairs, public rallies and seasonal market stalls. One compromise was needing to maintain access to the historic locations of underground car parks close to Freiburg's city centre. This means more vehicles sharing the Fahrradstraßen at peak times, particularly leading up to junctions.

Links to city centre neighbourhoods and the suburbs

East of the city centre at the main railway station, the landmark Wiwili walking and cycling bridge links caters for over 3m cycle journeys each year - a special achievement noting the cycle counter as the end of the bridge was only calibrated for up to 2.5m journeys. The location is a transport hub and interconnects with local and long distance bus and train services, and four of the city's five tram routes.

Weaving westwards, the cycle route shares footways and paths through neighbourhoods in a way that may be controversial and contested in many other cities and countries. People share space without apparent stress or malice between one other. On route we pass the city hall, covered in its solar panels and surrounded by tram and bike facilities, serving as a practical and symbolic demonstration of the city's green commitments as well as offering easy links for the population to access local council services.

People on bikes and on foot sharing space along a shop frontage in the neighbourhood of Stühlinger, Freiburg

Using parks and green spaces as part of the cycling network

Seepark is the city's main park with a shared cycle route around the lake, and separate sections for cycling catering particularly for the busy summer months. Attractive criss-crossing walking and cycle routes are also characteristic of the nearby neighbourhood park at Dietenbachsee, demonstrating a default, open access approach to cycling. Very few 'No Cycling' signs can be seen in the city.

Shared paths through Dietenbach Park, leading to the neighbouring area of Rieselfeld

4/7 It really comes into its own when you explore the parks and neighbourhoods in the West of City. Lots of mixed use shared paths away from roads. A reminder of the sensory benefits of #carefree places. Sounds of birds, kids playing. Smells of plants- even in winter pic.twitter.com/SjRPV4EQSG

Rieselfeld - the youngest of all Freiburg districts

A bridge crosses the Besançonallee road on the outskirts of Freiburg linking to its 'newest' development area at Rieselfeld.

Rieselfeld is Freiburg's Vauban 2.0, developed between 1995 and 2012, with both sharing similar design principles: a core spine defined by the tram route, and a mesh of walkways, then cycle routes and then finally roads providing the movement hierarchy which defines the local transport network.

Space is kept for green areas which have an informal or "undesigned" feeling, allowing people to feel at one with their 'natural' surroundings. Whilst it cannot be viewed as being a specific cycling design feature, this creates a context where people connect with the outdoors and feel fine about walking or jumping on their bikes as a normal option for local scale journeys.

As a self-contained neighbourhood, Rieselfeld feels vibrant with street activity at its core, whilst residents live quietly in the adjoining residential streets. A vox pop indicated locals' happiness with this arrangement.

Filtered permeability in Rieselfeld allowing bicycles and people on foot to pass, but not motor vehicles

“What really stood out was not so much the infrastructure, but driver behaviour. The calm driving, and mutual respect between trams, cars, people on bikes and those on foot…. It just seems to work. The other take home is that if public transport and excellent walking and cycling is put at the centre of a housing development, and if people can get to places of work, shopping and leisure, then a community evolves. People have alternatives to the car. And suddenly places become much more liveable. Kids can play, nature can be heard, people can enjoy the space.”
Claire Daly, Policy and Communications Manager, Sustrans Scotland

Snaking down south to Vauban using off-road cycle routes and sharing roads with slowly moving traffic, the generally good interaction between drivers and cyclists could be felt. On road, drivers hang back and pass slowly with the regulated German 1.5m passing distance in most cases. At junctions, drivers allow cyclists to maintain priority along routes and give them the benefit of the doubt when their turning intentions are unclear, reacting to design features sometimes no more elaborate than a red stripe.

By having engendered a respectful relationship between street users over time, the city is able to spend more of its money in expanding its bread and butter cycling facilities, rather than needing to direct vast sums and effort to engineer measures to protect cyclists against norms of bad driver behaviour.

3/7 Lots of painted lines, odd junctions, shared walk/cycle paths. Also better cycling #infrastructure such as #FahrradStraßen. But what really struck me in our 20km trip was driver behaviour: courtesy, respect for cyclists, trams waiting for people, cyclists for people on foot pic.twitter.com/Sp35GTmhB5

Vauban has a different feel to Rieselfeld, but is still filled with walking and cycling opportunities embedded in its layout: all spaces should be comfortable for active travel. The focus is not only on a route for getting into, through and out of the area.

Neighbourhood street in Vauban focussed on access by foot and cycle

From Vauban, a cycle lane carries people on bikes back to the main railway station, transitioning from on road to sections of shared footway in a largely continuous flow, aside from crossing some busy junctions, and all achieved in under 15 minutes. Even at the busiest, largest (and most remote) junctions in the city, it is normal to see crossings and facilities for provided cycling, with an apparent strong preference for signalled junctions over roundabouts.

Shared footway alongside main road between Vauban and Freiburg

A story of gradual success, giving time for culture change

Freiburg is not the perfect cycling city. You will not see the posh segregated 'cycling superhighway' lanes. You won't see wands and armadillos. The city has a lot of what, in other cities, might be considered to be 'substandard' cycling infrastructure.

But Freiburg does allow free movement by bike through a mix of on and off road routes covering the whole city. The environment is pleasant to cycle through and there are a large amount of cyclists, as well as respect, understanding and give and take between street users, including measured driving at slow speeds. Most people are content that this provides enough opportunities for their everyday needs to be fulfilled by cycling, supported by walking and public transport opportunities based around the tram.

Electric bikes are commonplace in Freiburg, and the recently introduced Frelo hire system for standard bikes adds to the mix

Handshake cities begin their own multiday immersive study tours in 2020, and we look forward to more reports from our own Future Cycling Cities as we compare what it takes to deliver cycling success in cities across Europe.