Rome responds to COVID-19 with 150 kilometres of cycle routes

Last week, Rome’s city council approved the construction of 150 kilometers of temporary and permanent cycle routes on the city’s main streets and along other key routes.

With the Italian capital only beginning to emerge from a long and intense lockdown, local authorities consider cycling an effective way for residents to remain mobile whilst adhering to the physical distancing rules in place to combat COVID-19.

The steps taken to support cycling have numerous benefits, as Virginia Raggi, Mayor of Rome attests, “by encouraging active mobility, we will be able to limit the use of cars and reduce the strain on public transport.” Aside from this, the cycling infrastructure should also help create the interconnected transport network envisioned for the Italian capital within its Sustainable Urban Mobility Plan (SUMP). 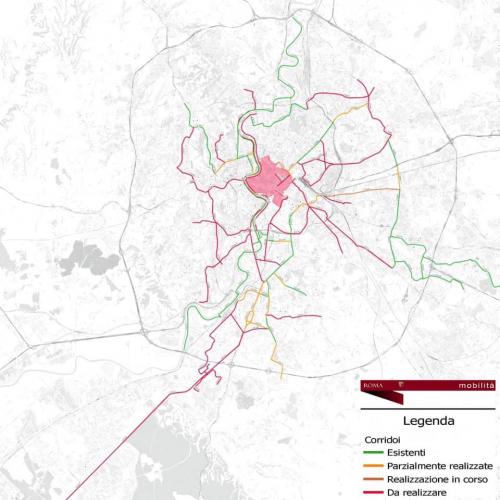 The network map showing the 150km of cycle routes

Construction on the first route at the Piazzale Cina began on 7 May. New road markings indicate the cycle lane, which replaces what had previously been a car-only lane.

Such simple and easy-to-implement methods enable the quick creation of a large network, which is crucial given the current situation's urgency. Some of the routes were already foreseen with the city’s SUMP.

Most importantly, the routes shoud "systematically boost the level of cycling in Rome; this is what the city wants to achieve with Handshake's help", comments Francesco Iacorossi, Project Manager, Roma Servizi per la Mobilità.

The plan also foresees an expanded role for cargobikes in the city's logistics system.

Enrico Stefàno, President of Rome’s Mobility Commission, says, “in phase two of our COVID-19 response, it has become more important to focus on sustainable mobility and cycling. The latter is the most effective, efficient and healthy way to complete many journeys made by people in Rome.”

Find out more on what the Italian capital is doing in Handshake on its dedicated page.