Handshakers returned to their respective cities last Friday, after an intense three days of discussion and reflection at the Handshake General Assembly in Rome. This opportunity to meet in-person, for the first time in more than two years, proved to be inspiring and motivating – a valuable outcome as the project faces its final months.

Hosted by project partner, ISINNOVA, the consortium met at the University of Arkansas Rome Centre – just steps from Piazza Navona. Surrounded by frescos and lit by sparkling chandeliers, the group of more than twenty people dug into definitive project topics, like individual city progress, mentor/mentee experiences, and the continuation of Handshake-knowledge after the end of the project. Some cities, unable to travel because of pandemic restrictions, joined via Zoom.

Giving cities a chance to interact was of central focus to the meeting, so many of the sessions were spent in collective brainstorm, evaluation and discussion. A handful of key presentations, however, introduced the participants to new information or topics.

One particular highlight was hearing from Rome’s Deputy Mayor for Mobility, Eugenio Patanè, who spoke about the city’s aspiration to become more bicycle-friendly, and the current and upcoming initiatives being pursued to further advance this goal.

On the second day, after another bountiful lunch, Handshake’s own Francesco Iacorossi led the group on a tour of the city via e-bike. Cars are dominant across Rome’s mobility landscape, so it has been a long and often challenging process to carve out more space for cyclists. The group witnessed this on the tour, riding in areas that felt tailored to the needs of cyclists, as well as areas that still felt primarily tailored to the interests of car drivers. Needless to say, it was an excursion rich in sensatory experience!

The final day of the General Assembly was spent primarily speaking about future steps and goals, answering questions like: What happens to the hard-earned discoveries and lessons learned during the project when it comes to an end this summer? What will happen to the collectively acquired knowledge and connections? There is sincere motivation within the project to ensure that the outcomes of Handshake are not lost with the conclusion of the project.

For the first time, many Handshakers were introduced to the still in-development Cycling Community of Practice (CCoP). The future platform, currently spearheaded by partners Velo Mondial and ISINNOVA, will act as a space for exchange and inspiration for cities wishing to develop their cycling capabilities. The CCoP will be officially introduced in the coming months.

The next time the group is scheduled to gather is for the final conference in June 2022, which is taking place side by side with the annual cornerstone cycling event, Velo-city. Stay tuned to learn more about how Handshake will be involved in Velo-city. 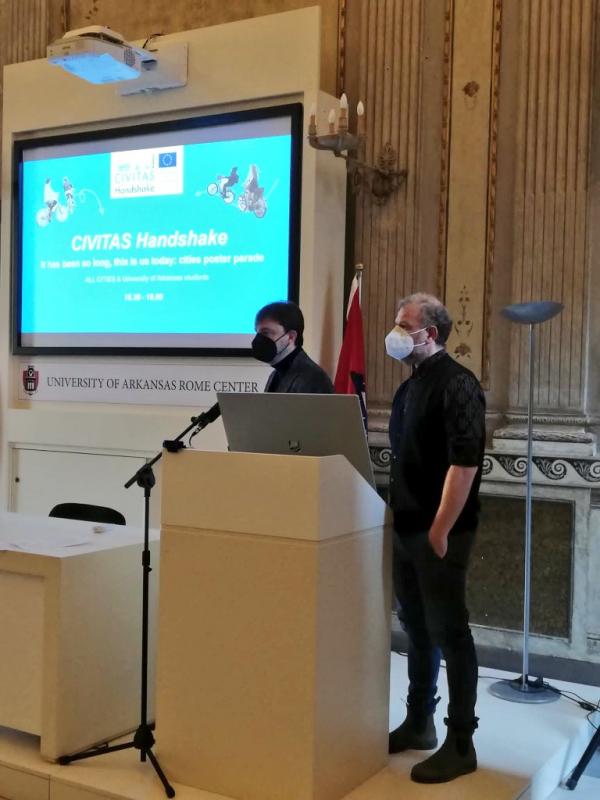